Happy New Year from all of us at the Wilson!

TRY SOMETHING NEW IN 2022!
Join artist, educator, and visionary Becca Jackson York for a series of workshops designed to give you the tools to take the next step in your theatre journey. These workshops are designed for adults who have any level of experience in the theatre and are wanting to learn and grow. Try the workshop that interests you most or bundle and save by registering for all 3! This $250 value is available to you for just $40 per workshop session or $60 for the entire series. Register today at bit.ly/wilsonacts.

WORKSHOP 1 - FRIDAY, FEB 18 - 6pm-8pm - So you wanna direct. Now what?  - This workshop is designed to equip the would-be director with tools and information to empower them to take the leap into directing. From choosing a play, thinking about design and concepts, and building a production team to creating rehearsal schedules, blocking actors on stage and marketing the show - the director does it all. Now that director can be YOU. Think you want to try your hand at this but feeling uncertain? You've maybe directed a few shows but want to learn some new ideas? Then this workshop is for you!

WORKSHOP 2 - FRIDAY, MAR 11 - 6pm-8pm - Acting for Grown-Ups  - This workshop is for performers of all experience levels! In this session, participants will play improv games, practice their audition techniques, learn how to add motivation, action, and intention to their performances, and gain the confidence they need to land their next role or just stand in front of a crowd or small group at work to do some public speaking. Do you love to perform? Do you want to try performing but you have some stage fright? Do you just want to have some fun on a Friday night? Then this workshop is for you!

WORKSHOP 3 - FRIDAY, APRIL 8 - 6pm-8pm - Musical Theatre Masterclass - This workshop is all things musical theatre: singing, dancing, being an actor while you sing, how to choose the right songs for an audition or performance, and more! Performers of all experience levels are welcome and encouraged to attend this workshop to gain confidence in their singing and acting. Participants are encouraged but not required to prepare a musical theatre audition cutting (16-32 bars) or a full song. Like to sing and dance? Interested in learning more about how to choose the right audition piece? Need some practice getting up in front of others and singing? Just want to hang out with some other musical theatre fans? Then this workshop is for you! 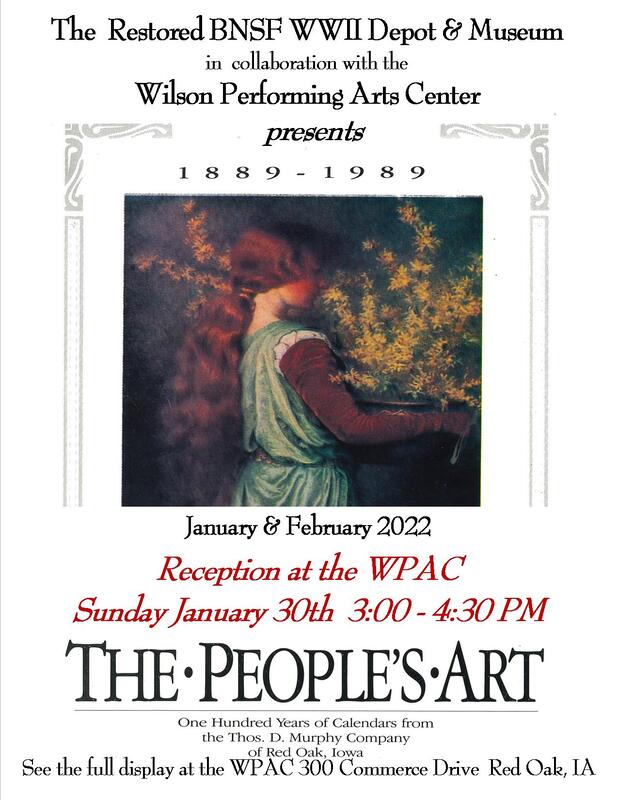 The exhibit The People's Art, 1889-1989, is a part of a two­ year project by the Montgomery County Historical Society which celebrates and preserves the one hundred-year history of calendar art that began in Red Oak, Iowa, with the Thos. D. Murphy Company.

The project involved photographing calendars from the turn of the century archives of the Murphy company on six thousand 35mm slides. These slides have been cataloged by computer to list artist, title, date, and subject so that they can be studied by historians and others interested in contemporary American culture. Researching the history of the Thos. D. Murphy Company and recording oral interviews from persons associated with the calendar art were part of the first phase.

The second phase of the project was the organization of a traveling exhbit, The People's Art, 1889-1989 , which contains eighty calendars, and illustrates the art, the calendar styles, and the popular themes of calendar art. One of the objectives of this project is to bring a new appreciation of the art and artists that have been a part of American life through calendars for one hundred years.

Consultants to the project were Dr. Loren Horton and Dr. Anne P. Diffendal. The project was funded in part by the Iowa Humanities Board and the National Endowment for the Humanities, and was made possible by the support and cooperation of ID Sales Promotion Associates, Inc., the Red Oak Public Library, the Iowa Arts Council, and gifts from Anna Lomas and Mary Jo Van Druff. Expert photography by HR Studio in Red Oak provided the basis for the slide collection and the catalog. The exhibit was designed and fabricated by Robert Bodnar of Omaha. Research and writing of the catalog was done by the project director. Assistance from present and former employees of the Thos. D. Murphy Company, as well as hundreds of hours of volunteer time donated to the project, and the whole-hearted and generous support of all the persons involved contributed to the
successful completion of the undertaking.
Bettie McKenzie, Project Director

​Come visit the new Wilson Music Park!
​Thank you to the City of Red Oak, The Montgomery County Foundation and the
Red Oak Rotary Club for their contributions to this project !

A look at past WPAC events: